They like to say that magic has left this world and there are no places left that soothe your soul in the ways that make you feel renewed. Let me assure you that isn't true. Just outside tiny Silverhill Alabama, down a dead end road, amid the horses in the fields sits Blue Moon Farm - home of the Frog Pond stage. Most every Sunday afternoon around 3, Cathe Steele - owner of Blue Moon - opens her house to music lovers and like minded people for what she calls her "Sunday Socials".
Modeled after Levon Helms 'Midnight Rambles' in Woodstock you only have to contact Cathe by email or Facebook to get added to her list of guests. Everyone brings a covered dish and their chosen beverage and settles in on the lawn out back for an afternoon of good music and meetin and greetin. Cathe is a throwback to a kinder and gentler time when friends got together and talked and met new friends. Going to her home you feel an instant shock of recognition and familiarity when you meet her....as if you have known her your entire life. I felt like coming over in the morning for coffee and swappin gossip on the deck.

In the Back yard she has built a stage that looks just like the back porch you always wanted. Here musicians play and sit and talk as they share songs with one another and the audience. A tip bucket is provided for the thank-yous. They take a break midway through where everyone can go and eat or talk to new friends. The musicians will sign copies of their cd's for you and generally hang around tell you what they think of stuff. Like visiting your Uncle Earl and Aunt Esther on sunday evening but nobody's pinchin' your cheek or askin' why you ain't married yet.

The audience ranges from young kids to elderly folks like Dorothy! Some listen right in front of the stage and some wander around and talk and watch the horses and listen to the singing through the trees. 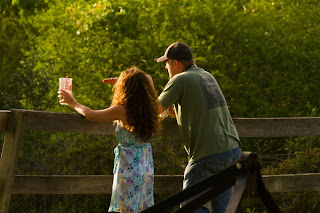 And of course there is The Music. I have been there twice and was lucky enough to hear Grayson Capps both times. I am thoroughly hooked on this guys' music. I have also seen him with his band and I have to say that any time with Grayson seems intimate. He is one of those rare artists that listening to him sing his songs is like someone telling you a good story over a cold on a hot evening. Sometimes you even hear yourself in his voice. 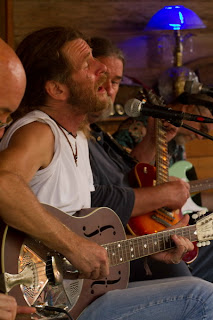 The folks sittin in With Grayson and his handyman, Corky Hughs, have included Sugarcane Jane from this area and Big 'O' Otis from New Orleans.Sugarcane Jane are a joy in their own right and a wonderful mix with Grayson. Click on the link above to learn more about them.

Oh yes, Cathe is involved with resuce dogs too and I hope you like dogs too cause there are always quite a few running around asking to have their ears scratched and maybe catch a dropped morsel or 2.
My friends you would be hard pressed to find kinder or nicer people to hang out with than Cathe Steele and her friends. In particular Grayson Capps is a wildly wonderful talent that is you get to see him it really will enrich your life. Failing that check out his CD's from his web site - I promise you wont be disappointed!

Donate to The Postcard Fund

On The Road Photo

Where To Get The Blues

For the Vinyl of Your Life

Hands In The Blues Project 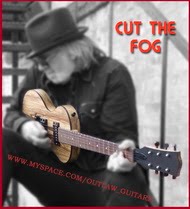